As Feather M0 is compatible Arduino IDE, everything learned for Arduino Uno can be applied to Feather M0. Just care about voltage, the UNO is 5V Logic and the Feather 3.3V logic. 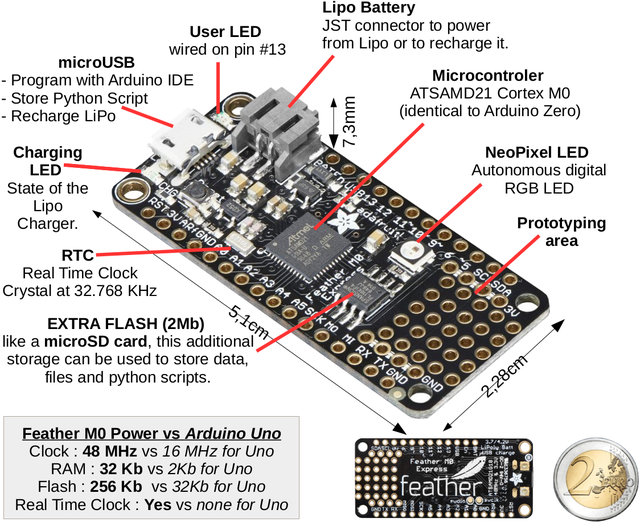 This ATSAMD21G18 has USB built-in which offers USB-to-Serial and debug feature (so no need for FTDI-like chip).

The feather has the following specs:

The Feather M0 Express can be be programmed with Arduino IDE -OR- with CircuitPython (a flavor of MicroPython). This tutorial focus on Arduino IDE development. Check the Adafruit Tutorial if you are interested in CircuitPython Programming.

About the additionnal Flash:
The SPI Flash storage act like a tiny hard drive. 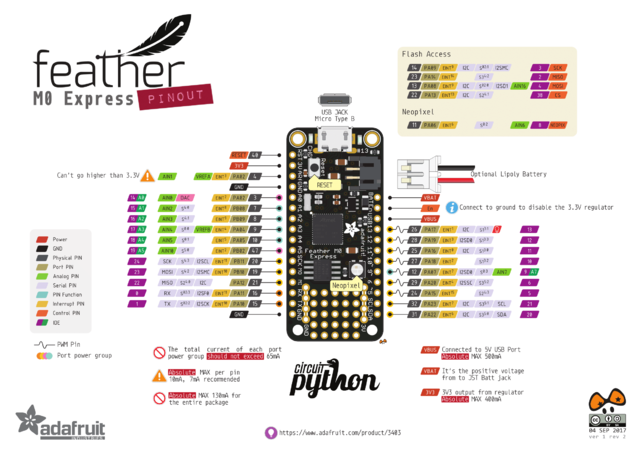 The Feather M0 benefits from the Cortex M0 microcontroler hardware. If has many buses and many pins. Let's review them togheter!

This concerns all the I/O pins on the microcontroler.

The following pins have specific features:

The "Express" product line is designed to also run CircuitPython. To ease the prototyping, Adafruit added 2 additional items on the Feather M0:

The NeoPixel LED is wired on the #8 (in Arduino), so you can use the library by configuring a ribbon of only 1 pixel. The NeoPixel is powered with 3.3V but this doesn't impact the color or the brightness.

Note: In CircuitPython, the LED is used to mention the running status.

The Flash pins are:

On the Feather M0 Express you will be able to access this SPI bus (and the Flash) under the name SPI1. So the Flash device is totally distinct from the Feather GPIO's.

When used with Arduino, this SPI Flash memory would allow read/write operations.
Under CircuitPython (MicroPython Flavor)

Under CircuitPython, the SPI Flash memory is a native storage for the Python interpreter. The Flash memory does appears as read only for the user code. 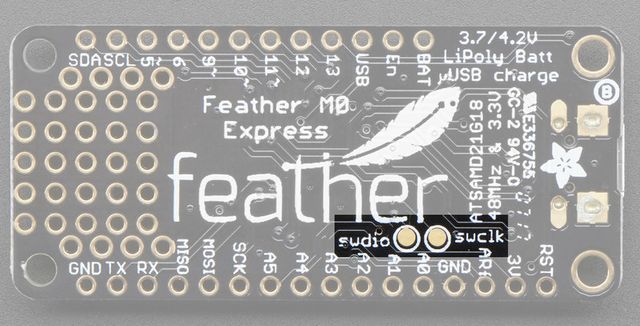