NeoPixel are usually sold in strand but is also very popular is various form-factor. 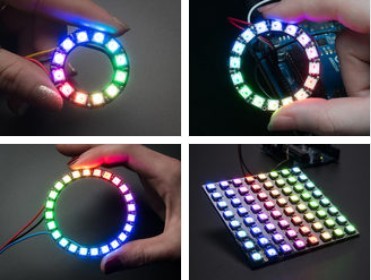 The NeoPixels contains a small microcontroller used to decode the information send on the Data Line and using PWM generator to drive the LEDs. 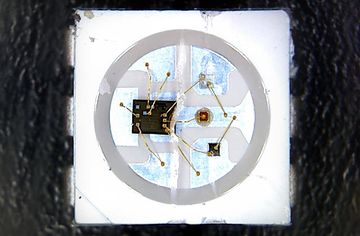 It also include a constant current supply for the LED, which means that the color would not change with the supply voltage.

NeoPixel is a very powerful technology. You can learn more about it from the Adafruit's neoPixel User Guide or the translated NeoPixel user guide.

The Feather M0 Express also contains a NeoPixel LED. This LED is used by the Microcontroller to inform the user about its running status (red or green). 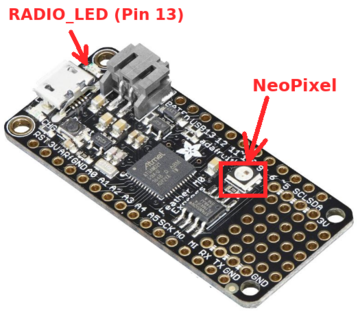 The great thing about this NeoPixel is that we can take the control of it from your Arduino sketch.

We just need to know the pin to use (pin 8) and install the Adafruit NeoPixel Library for ATSAMD21 microcontroller :-)

The NeoPixel should be viewed as the very first LED of a NeoPixel Strand having only one single LED.

You can also use the "Library Manager" to ease the installation of the BMP280 library.

From the "Sketch" menu, select the sub-menu "Include library" --> "Library Manager" like shown on the picture here under. 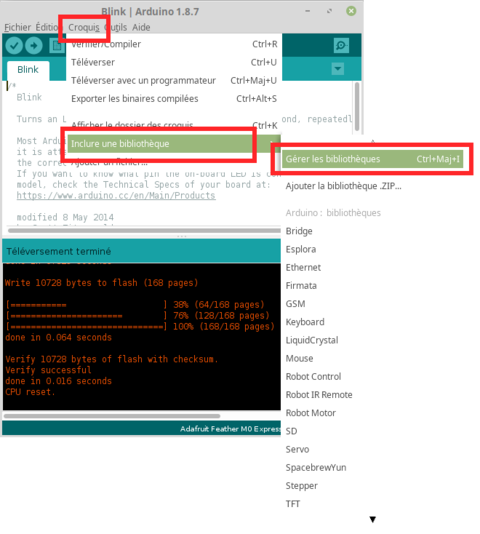 In the library manager, key-in the value "neopixel" in the search box. Then click on the install button in the front of the Adafruit DMA NeoPixel Library by Adafruit. This library is suited for the ATSAMD21 microcontroller as used on this Feather M0 plateform. 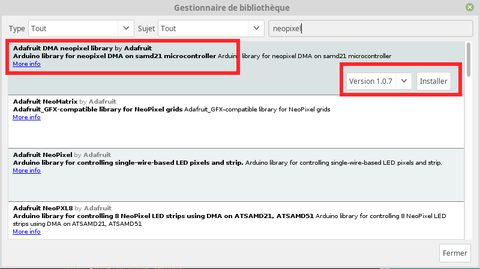 The following script demonstrate how to manipulate the onboard NeoPixel.

As there is only one pixel (one pixel on the strand), the function pixel.setPixelColor() will always have the first parameter is set to 0!

This means that we change the color of the LED #0 on the pixel strand.