It is now time to establish a communication between:

As the kit contains contains two Pico microcontroller we will be able to create the "Data Emitter" on the CanSat as well as the Data Receiver at the ground station. 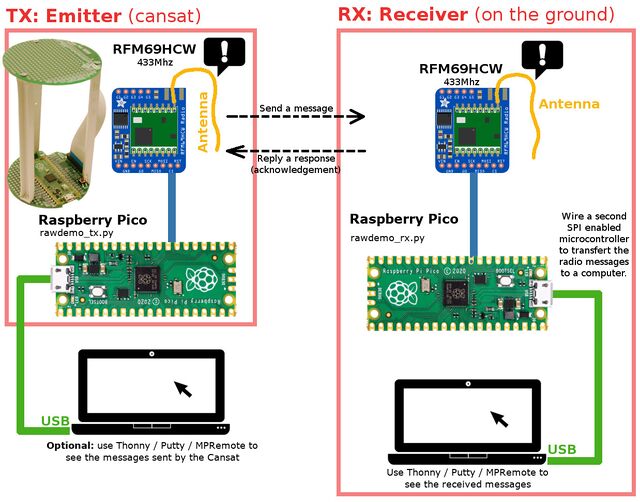 As we will see, there are 3 key items to be highlighted:

In this simple example:

The following sequence diagram (click to enlarge) shows how the calls takes place within scripts, within the library and within the air. 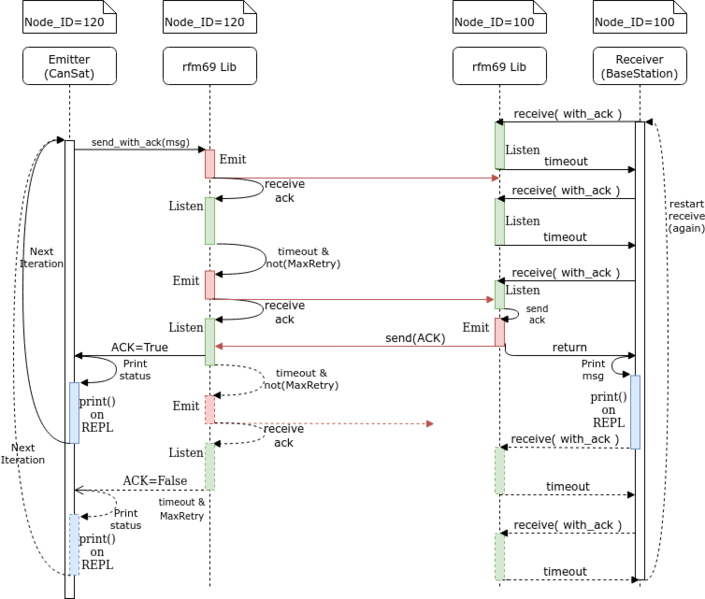 The Adafruit's FRM69HCW are provided with a MicroPython library available on GitHub.

You can download and copy the library manually to your board from the Repository.

First, open the repository, then navigate to the file lib/rfm69.py .

Follow the steps describes in the "BMP280 library installation" to copy the RFM69 library to your micropython board.

Once copied, you can also check the proper installation by typing from rfm69 import * .

The RFM69 library repository contains many examples of usage. Do not hesitate to check them!

For this example, a simple wire twisted in the antenna hole will do a great job for testing.

The antenna design is a key feature to ensure a reliable communication over a long distance.

A µFl connector (also named uFl) is looking to this:

A PCB SMA Connector is looking to this:

To make the module communicating together:

The tuned frequency is declared with a line like this:

where the tuned frequency is directly assigned to the frequency_mhz property.

In packet radio, several teams can share the same frequency if they use distinct encryption key.

Like TCP (from TCP/IP network), the packet radio is able to detect packet collision and try to recover from it.

However, more teams share the same frequency, more collision we have.

The module encrypts the data with AES-128.

It is also possible to defines the same key with a more user friendly code.

When all the teams do use the same frequency and the same key then they will all receives the messages from the other teams also sending messages. Your messages will also been received by all the other teams.

The transmission power is set to 13 dBm by default (it is safer across all RFM modules, the library also work for RFM95).

The transmission power can be set from 14 to 20 dBm by assigning the tx_power property.

Tips & Tricks:
It is possible to estimate the transmission power (in milliWatts) by using the following function.

Before showing the details of the wiring diagrams, here is a "tip" helping to check it!

The following script "test-rfm69/test_config.py" (TODO TODO TODO TODO) from the cansat-belgium-micropython contact the RFM69 module to initialize it and read back properties.

If the script can properly establish a communication with the module, it will returns the following results:

We will prepare our receiver station.

The receiver stays on the ground and receives the message sent by the Emitter and forward them to a computer.

Here how to wire the RFM69 module to the Raspberry-Pi Pico. 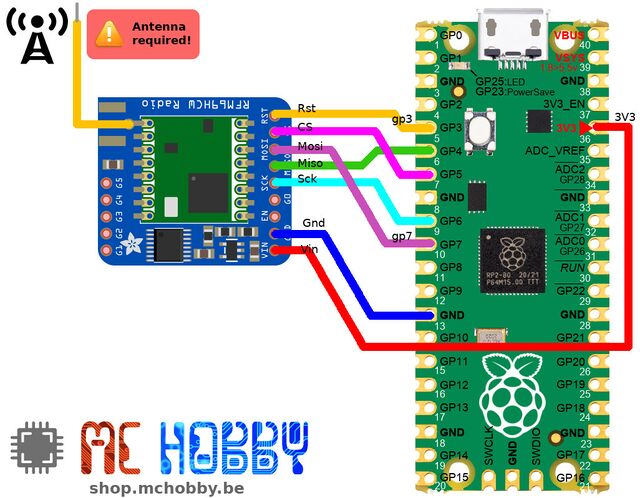 Here is the description of wiring between the Pico and the RFM69 module.

Now we will load and executes the test_receiver.py receiver script. The script must be downloaded from the repository.

The script can be either executed from Thonny -OR- transfered to the Pico and executed directly on the microcontroler.

It will output the messages on the REPL/Shell over the serial line.

The frequency and encryption key must be updated from team to team to avoids messages collisions and cross-over transmission between the teams.

And update the value for FREQ and ENCRYPTION_KEY.

The NODE_ID doesn't have to be updated, its is used as node identifier allowing message & ACK exchange between one receiver and several emitter (each having an unique NODE_ID (for the same ENCRYPTION_KEY and FREQ).

Openning the Serial Line and run the receiver_test.py script.

As we want to see the received message, we will open a terminal to receives the messages over the USB-Serial line.

This can be done with the help of:

Just starts the script and wait for the messages to come: 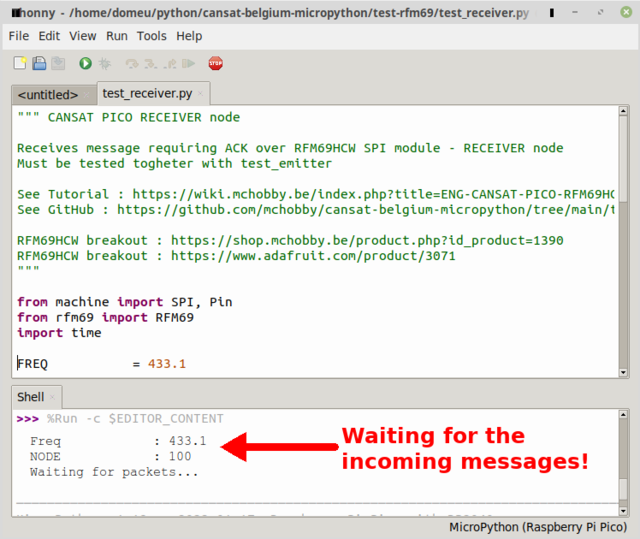 Voilà, we are ready to test the emitter (cansat).

In this second screen capture (here below), we do used the "mpremote" (command line tools) to access the REPL/Shell session on the Pico board.

As we can see on the screen capture, the script is receiving messages from emitter and sending ACK back to the sender. 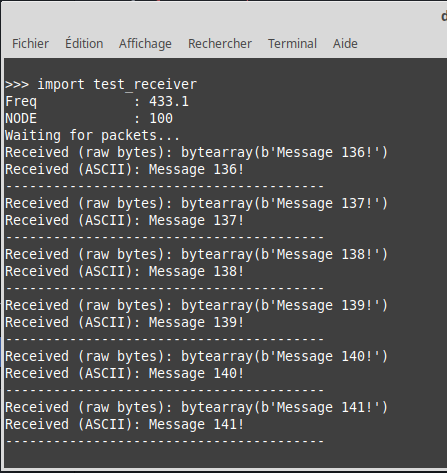 As the first message received is numbered 136, we do know for sure that the emitter script was started a while before.

The emitter can be made 2 different ways (shown below).

The wiring is, in facts, identical in the two options (and identical to receiver).

Only the script content will changes between the emitter and the receiver.

Emitter Wiring 1 : as the receiver

wiring (visible here before) is identical to the receiver wiring.

(see the Receiver section for more details about the connections).

Emitter Wiring 2: with the Kit Cansat for Pico

Here how to wire the RFM69 module to the base board of Cansat Kit with Pico as recommended. 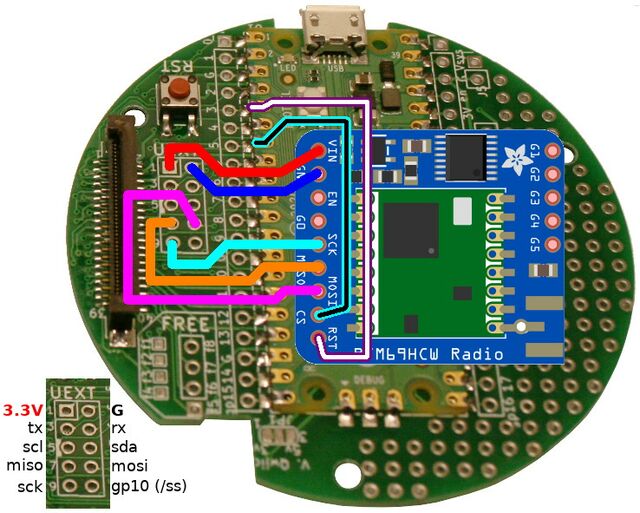 Now we will load and executes the test_emitter.py emitter script for the CanSat.

The script must be downloaded from the repository.

The script can be either executed from Thonny -OR- transfered to the Pico and executed directly on the microcontroler.

It will output the messages on the REPL/Shell over the serial line.

The frequency and encryption key must be updated from team to team to avoids messages collisions and cross-over transmission between the teams.

And update the value for FREQ and ENCRYPTION_KEY.

The NODE_ID and BASESTATION_ID are preconfigured and doesn't need to be updated.

Remark: the frequency & encryption key are enough to "isolate a group". Nodes ID are used to create mesh network within a group. A simple mesh with 2 nodes (the Receiver base station and the Emitter CanSat) is enough to exchange messages with Acknowledgement.

Anyway Node ID can be updated for test purpose. To do so, locate the following lines:

Opens the Serial Line and run the emitter_test.py script.

As we want to see the sent messages and acknowledgments, we will open a terminal to receives the messages over the USB-Serial line.

This can be done with the help of: 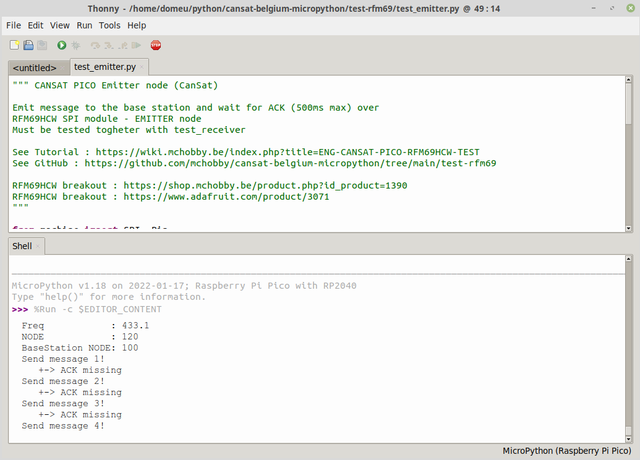 As the base station (receiver_test.py) is not running now ACKnowledgment are sent to the emitter.

The following capture show the emitter_test.py script running from the Thonny. As seen below the messages are properly received by the receiver (the base station) as it sent back the ACKnowledgment. 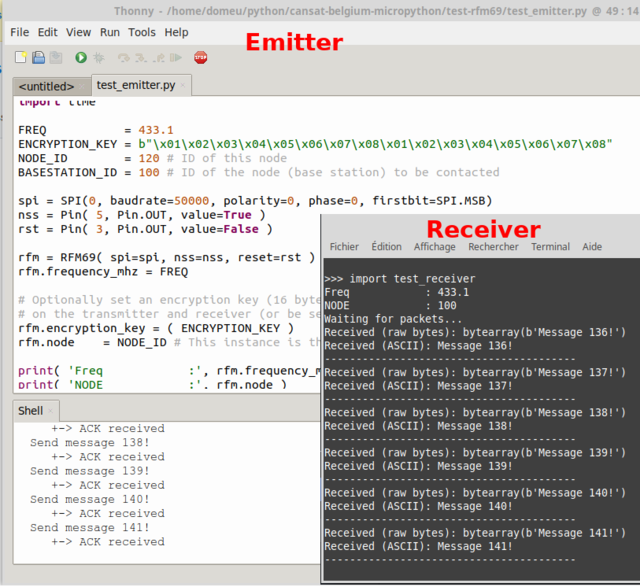 By reducing the emission delay from 1 second between messages to 100ms (0.1sec), it is possible to evaluates the reliability and stability of the communication with ACK.

The following screen capture shows the receiver and emitter captured after 2200+ messages sent and ack. 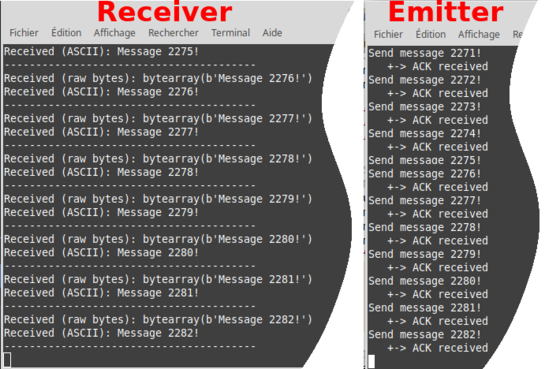 Reading the sketch would help to understand how the code works. The scripts contains many comments.

Check the examples associated the RFM69 library for more informations.